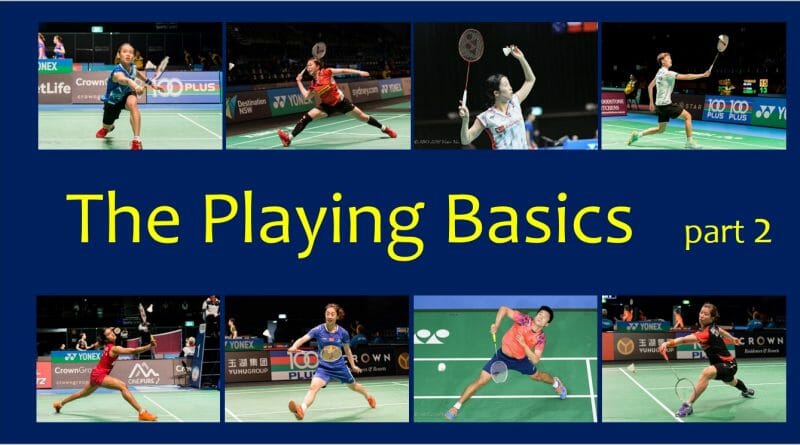 I hope you enjoyed Part 1  and have found time to reflect on the idea of creating underpinning skills.  How we introduce the Badminton Playing Basics is a subject that I’m passionate about.  It would be great to hear if you tried out any of the ideas on court with your players.

1   Hitting at a balanced extreme range from the body

2   Hold the racket with a sideways grip

I thought that the list must contain strokes such as a smash, a serve or a backhand.   However once I was shown that each component could be developed in many different ways and then could be used in a variety of strokes, I began to see things differently.

The components of hitting and moving skills can be improved in their own right, not just as part of a larger stroke/movement skill.

I recommend that you initially focus on these components.  Try to develop partial mastery of these simple skills before larger more complex strokes and movements are introduced.

To be honest it wasn’t an easy learning experience

It took a while to understand that I didn’t just have to practice one stroke in isolation.

I was given an insight into creating situations where a core element was developed that then appeared in many strokes and movements.

So with novice players, rather than coach a whole stroke, I was encouraged to coach specific elements of strokes that ensured the whole stroke would be easier to perform and leran.

This was different from the traditional repetitious work and statement  “today we will work on ………”  (stroke).

I don’t want you to struggle as I did

1.  Striking at a ‘comfortable’ extreme range to the body 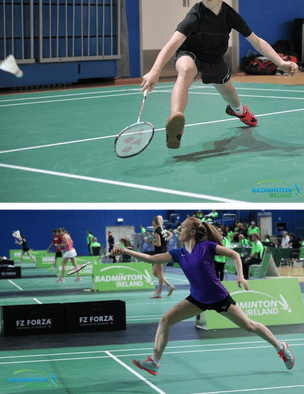 You may find that the term ‘comfortable extreme range’ seems contradictory.

How can you be comfortable at this extreme range?

It does not mean overreaching or trying so hard that recovery is not achieved i.e. falling over.  Yes, there will be times when there is no alternative but to totally commit to getting a shuttle with no thought about recovery.

This Playing Basic is not about diving or committing to a stroke without recovery.

There is more to feeling comfortable at an extreme range than just stretching when getting the shuttle back over.  Players who develop with this as a core basic will still feel in control of themselves when they are pushed to their limits.  They will be able to reduce the time for the opponents to react, prepare and move.  They will in some instances develop more power.

Encourage this Badminton Playing Basic from the very early stages of development.

It is as much a state of mind as it is a physical challenge.

If you want to know more click here to read about how to use the Playing Basics in your practices.  Look out for the tips and suggestions on how to encourage development at a ‘comfortable extreme range’.

2.  Hold the racket with a sideways grip

For the majority of strokes, a sideways grip will be a basic.

There will be no single way of holding the racket but early use of ‘Wallwork‘ practices will encourage a sideways hold that will enable ‘lots’ of shots to be played without significant changes.  I recommend that you use this method of striking against the wall (Wallwork) as it compliments this and some of the other Playing Basics.

I have found it amazing how the use of ‘Wallwork’ practices prevent some of the classic errors such as ‘pan handle’ but is also is very easy and simple to coach.

Initially, I struggled to realise how valuable it was, but now I would not hesitate to use it

The sideways grip is not the only way to hold or grip the racket.

Other grip variations are obtained by merely adjusting the fingers.   The grip will often be firm on contact, but still allow control with hand flexibility and manoeuvrability.

Early preparation means getting into the preparatory hitting position for the stroke as you start to move towards the shuttle.

It is also useful as an aid for creating deception, giving the appearance of having “time” in which to play the shuttle.  I have found this to be a most useful aid when teaching novice players.

Encourage EP (early preparation) everywhere, I promise that you will not be disappointed by the effect this has on your players’ development.

For the majority of power strokes, the racket hand must be “cocked” prior to contact, often early in the preparation.

I really like the deep forehand (bottom right photo) hand position as its a great example of preparation for power.

Have you thought about this before and allowed or encouraged it in your practice sessions?

I would love to hear your thoughts of Part 2

Which of these 5  Badminton Playing Basics did you find created an image immediately in your mind?

It certainly took me a while to understand no.4 and to realise how important it was.

The excitement then grew when I realised that once ‘hand cocking’ was at least part developed some of the traditional errors stopped appearing.   Do you have any experience about this?

I hope you enjoy the questions.  Is there anything that you’ve read that has helped or you disagree with then please send me an email.

In Part 3 we will look at Playing Basics 5 – 7.   I hope you will stay around and be prepared to comment with ideas of your own.

5   Pretension in starting and moving 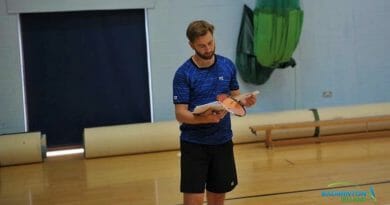 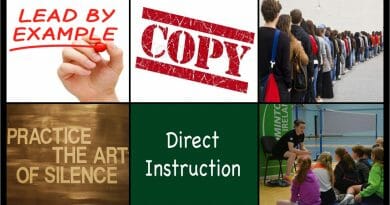